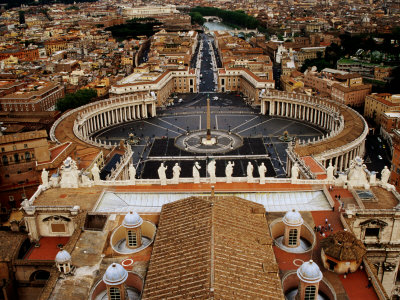 The cardinals are meeting starting today and will soon set the date for the conclave to elect the next pope. It could start in the next couple of days (unlikely) or as late as the fifteenth – or even the twentieth if they determine that there is an urgent need to delay (very unlikely). You probably have a little bit of time before the conclave, then, dear reader, to get your hands on some of the books (nonfiction and fiction) below from the reading list that I promised.

The Church Visible: The Ceremonial Life and Protocol of the Catholic Church by James-Charles Noonan, Jr.

I have to admit that when I heard the resignation announcement, one of my thoughts was that I was glad that I had a copy of The Church Visible on hand. The first chapter is devoted to the College of Cardinals, and includes the procedures for a conclave and the election and installation of a new pope. Noonan clearly did not anticipate a papal resignation: the section begins with the heading “Death of a Pope.” Nevertheless, the procedures for conclave, etc., will be the same, and this is the best book to look to for the details if your knowledge of Latin is not quite up to the level of your English.

If you can handle the Latin, you want a copy of the Ordo Rituum Conclavis (also available here). If you ever found yourself having to host all of the cardinals for a papal conclave at your local parish, this is the book you’d want to have on hand. (Just in case, you know.) You’d also want a copy of Sede Apostolica Vacante, which according to the presentation of the book, “refers therefore first of all to the above-mentioned Ordo. However the material considered examines everything connected with the Vacant See as established by the Apostolic Constitution «Universi Dominici Gregis on the vacancy of the Apostolic See and the election of the Roman Pontiff».” And finally, you should refer to Normas Nonnullas, Pope Benedict XVI’s February 22nd motu proprio “on certain modifications to the norms governing the election of the Roman pontiff.”

The Oxford Dictionary of Popes by J.N.D. Kelly and M.J. Walsh

I’ve been wanting to pick up our copy of this and Just Read It – perhaps this Lenten conclave / election / new pope time is the excuse I need. The book strikes an excellent balance – it’s arranged chronologically, starting with St. Peter and ending with (in this edition) Pope Benedict XVI, with a brief biography of Every Single Pope And (historically significant) Antipope.* It’s not a long book, but it’s not short, either (especially considering the size of the type). It’s recognized as a very balanced presentation of the popes and papacy – written by an Anglican, but more Roman Catholic in perspective than not. And for the scholars among us, every entry is followed by a brief bibliography, the abbreviations for which take up three and half pages in the beginning of the book, from the Abhandlungen der deutschen to the Zeitschrift der Savigny-Stiftung für Rechtsgeschichte (say those three times fast…).

[*Pope Michael, for one, is not included in the book.]

This is not a list for those looking for masterful prose. Think of it instead as a time machine, mostly to the not-too-distant past. And if you have other conclave novel recommendations, feel free to post them in the comments!

I’m including this in the list because there are people who liked it. I know I wanted to like it. I like action, I like books featuring the Catholic Church, and books set in Rome. But . . . The writing reminded me of Dan Brown’s (not a compliment) – except that it was slow. Slow Dan Brown = not a fun read. For me, anyway. The book is set during the election of Pope Benedict XVI following the death of Pope John Paul II.

I just happened to check this out of the library the week before the resignation announcement – I had no idea how timely a choice it would turn out to be. I’m not too far into the book right now, but I’m already finding it to be a fascinating look back into the Catholic Church just before the abuse crisis broke open in America in 2002. Before President Obama’s election, before the HHS mandate, before Cardinal Dolan, before a sea change in what it means to be a popular US bishop. And yes, it features a conclave. Or two.

The Final Conclave (1978) by Malachi Martin

Is a Vatican novel list complete without a book by the  well-known author Malachi Martin? Martin is probably best-known for his 1996 Vatican satanic conspiracy novel Windswept House, but The Final Conclave is from a couple decades earlier, and as his Wikipedia entry intriguingly points out: “In his book The Final Conclave, published on 1 August 1978, the month of the 1978 conclave that resulted in the 28 August election of Albino Luciani [Pope John Paul I], Malachi Martin wrote of the unexpected election of a Cardinal Angelico, a figure that has been interpreted as corresponding to Luciani.” Martin himself begins the book with the following author’s note: “The heart of this book . . . is the description of Conclave 82. The participants are fictional. But in every other respect it is a scenario based upon the factual material preceding it and upon all available accurate knowledge of the issues and factions at work in the choice of Pope Paul’s successor.”

Pope John XXIII died the day this book was published – June 3, 1964. This book excellently captures the Zeitgeist of the period of the Second Vatican Council, and more than a few people have said that it foreshadows the election of Pope John Paul II. Optimism, the shadow of communist oppression,  Cardinal Kiril Pavlovich Lakota and (dare I say appropriately) restricted theologian  Jean Télémond.

The Cardinal (1950) by Henry Morton Robinson

Okay – I’ve never read this book, or even held a copy. I’ve just, well, seen the movie. Both the novel and the movie are based on the life of Cardinal Francis Spellman, Archbishop of New York from 1939-1967. He was never elected pope (nor did he ever expect to be!), but the book and the movie feature the conclave of 1939 that elected Pope Pius XII.

This is an apocalyptic novel, set in the distant (to 1908) future – a future that features, among other things, a mode of air transportation (imagine!). For the 21st century reader, it gives windows into both the past and a possible future, and it paints a picture of a conclave unlike any featured in any of the other books on this list.

Technically, there is no conclave in this novel – but the end of the book covers the transition from the first pope (St. Peter) to the second (St. Linus). It is worth reading for a sense of the beginning of the Church, the beginning of the papacy, the audacity and bravery and faith of the men and women whose shed blood formed the seeds of the Church that we so often take for granted today. I’ve linked above to a free e-book edition. I prefer the more recent thee- and thou-less translation of W. Kuniczak, but it’s not a free e-book.