When I was pregnant with our baby boy, I briefly thought about checking out all sorts of “your new baby sibling” books from the library for his two-and-a-half-year-old older sister, but I decided against it. First, she was pretty well aware of what a baby was, so I wasn’t worried that she was entertaining expectations of a walking, talking playmate her size. Or a puppy, doll, Santa, or anything else that would make the reality of a new baby an abrupt letdown. Or a complete surprise.

Second, the only new-sibling books I could think of off the top of my head were rehashes of the classic “older sibling has conflicted feelings about the new baby that are resolved through [insert device] and then things are peachy. The end.” If it turned out that our daughter did have conflicted feelings about her baby brother, using literature as one way to deal with those feelings seemed quite reasonable. But actually introducing the possibility of feeling jealous, neglected, overlooked, unimportant, etc., at the birth of a new sibling sounded to me like a way to plant the seeds of those emotions where they might not otherwise take root.

And as it turned out, whether or not skipping the siblings books had anything to do with it at all, we have a big sister who is one big fan of her baby brother – not really any inner turmoil to resolve. Take that for what it’s worth.

The book that we did borrow from the library (repeatedly – practically every time she stumbled across it in the board-book bin she wanted to check it out) and then gave her a copy of when her brother was born was Everywhere Babies by Susan Meyers, illustrated by Marla Frazee. The book just does such an excellent job of capturing the experience of life with a baby one loves, through the illustrations of babies of all sorts of shapes, sizes, backgrounds, and facial expressions, and through the soothing, rhythmic, “Every day, everywhere, babies . . . (are born, are dressed, are fed, are rocked, play games, make friends, etc.)” text.

In a culture that has childrearing practices/philosophies/cults that are at times bitterly opposed to each other and convinced of their own innate superiority, it’s nice to run into a book that displays nursing and bottle-feeding, strollers and slings – and on top of that, has gentle, funny, realistic depictions of parental exhaustion scattered throughout!

Simply because it has been made a big deal of elsewhere (praise or condemnation, depending) let me point out that on one spread, two overcoat-wearing men are pictured walking down the street with their arms across each others’ backs (as, for instance, Roman youths do) – no baby with them; and in another picture, a baby is being rocked to sleep in a cradle by two women. My reaction is the same as that of another Amazon.com reviewer – that the illustrations are such that they don’t require a particular narrative; it’s up to the viewer to define the relationship. And there is such a thing as (drumroll, please): Friendship! As an article in the New York Times that I included in this week’s Midweek Link Lunch points out:

We have trouble, in our culture, with any love that isn’t based on sex or blood. We understand romantic relationships, and we understand family, and that’s about all we seem to understand.

Close friendships between members of the same sex, after all, are also suspect. Even Oprah has had to defend her relationship with Gayle King, and as for men and men, forget about it.

P.S. I linked to the board book because that’s the one we fell in love with and now own, but there is also a (large!) hardcover edition, a lap board book that’s almost the same size as the hardcover, and a paperback send-a-story edition. 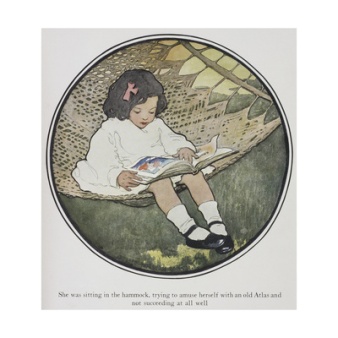